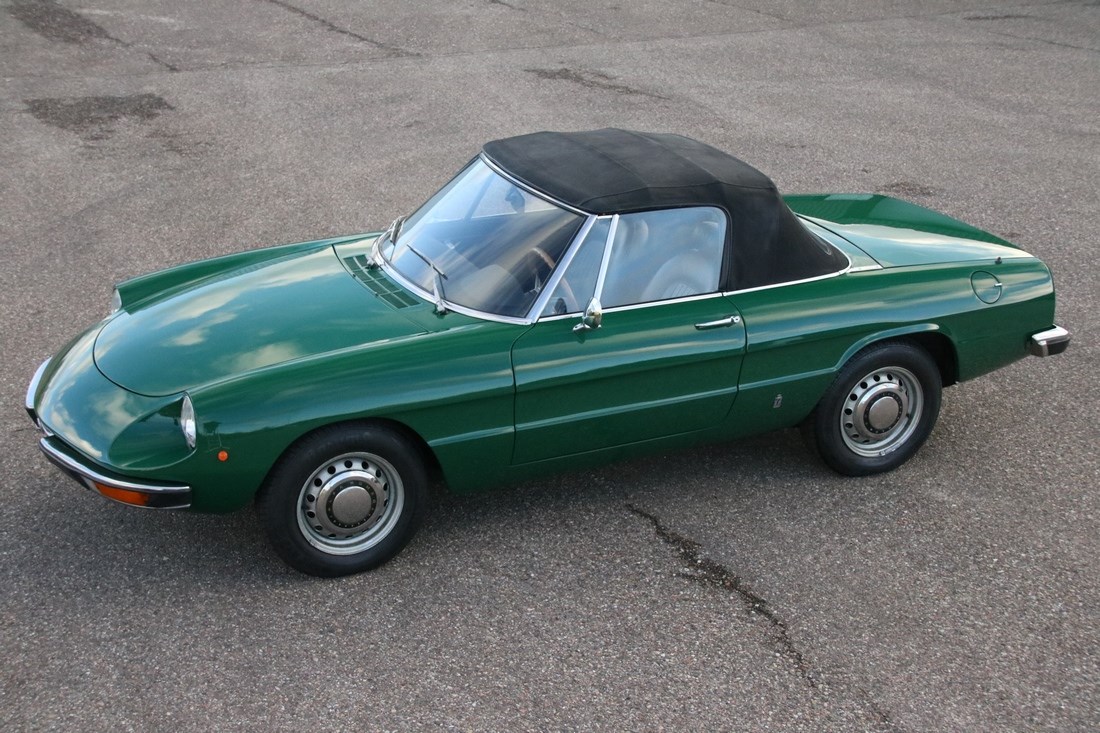 The classic Alfa Spider, a car that has the appearance of a modest top actress, is a desirable car already, in this colouration one might fall in love with her. Meanwhile grown into an icon, from the not quite so small oeuvre of Alfa Romeo. 'Spider', the Alfa equivalent of the English word 'roadster'just sounds better but means the same; engine in the front with rear wheel drive. The famous, produced by the millions inline 4-cylinder with double overhead cams produces the famous Alfa sound which makes her so characterful to drive. The straight-cut rear, also referred to as 'Coda Tronca' wiggles characteristically on bumpy roads. All in all, an Italian beauty with a strong character. Not perfect by any means, that would make her less interesting, she is gorgeous and grants driving pleasure. Compared to modern production numbers very little were built. So, when I was offered to go have and have a look at one with some minor issues, one cannot say no. I can tell you firsthand, it was not in the same state as described. Although the Italian climate is often kindhearted to the steel of older Alfa Romeos, this one was starting to show her age. Not dramatically, but enough not to want her, and that’s where you decline politely. It is however an opening for a good conversation. After half a day of negotiating, with a heavy Tuscan lunch included, there became some room in the price, enough to properly and rightfully restore the car, and that is exactly what happened. It was here in the Netherlands, where the light isn't sun kissed and the state of the car became more evident, that under my own supervision she was sent to a specialist and professionally stripped back to bare metal and restored. Photo documentation is present, as is the invoice of the whole operation. The result is stunning, a gorgeous Spider in a fantastic colour. Beautiful and straight deep lustrous paint, and then at-last rust-free. Whilst this price does not make the project profitable in any way, it was a bloody good lunch we had. I look forward to delivering this wonderful car to you.

Hardly any options were offered by Alfa Romeo at the time. This Spider is fitted with a pretty wooden Hellebore steering wheel and a period radio.

As described before, the body has been professionally restored. Professionally cleared of rust and treated. Pretty and dust free paintwork in the original factory colour of this exact Spider. The paintwork has obviously been executed after the complete car was stripped down. Where needed, news rubbers have been fitted. All fittings are nicely symmetrical and the doors have excellent shut-lines all-round. Study the excellent result on the photos. 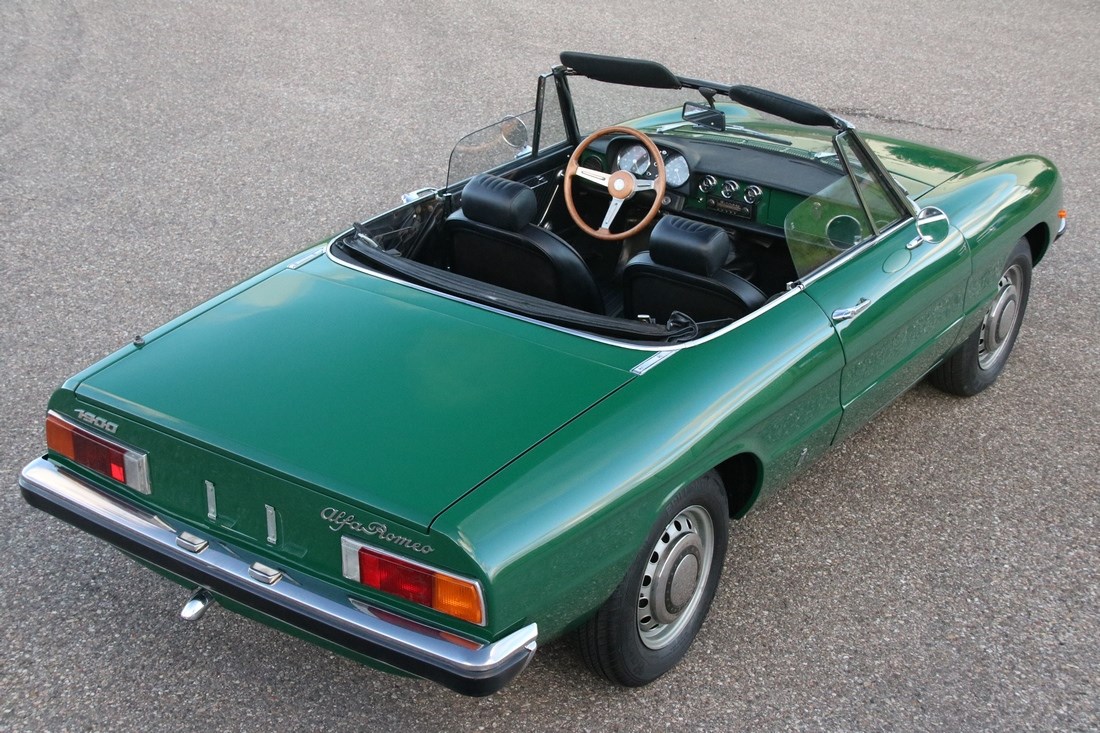 Such a pretty and undamaged interior! Here the car was not in need of much attention. The seats, door cards, dashboard and floor mats are all undamaged. Nice fresh gauges, steering wheel and switches. The wooden Hellebore steering wheel boosts the vintage atmosphere of the cockpit. No cracks on the dashboard, new mats with Alfa logos on the floor and undamaged sills. The some what fragile interior of this generation Spider is actually in very good above average condition. 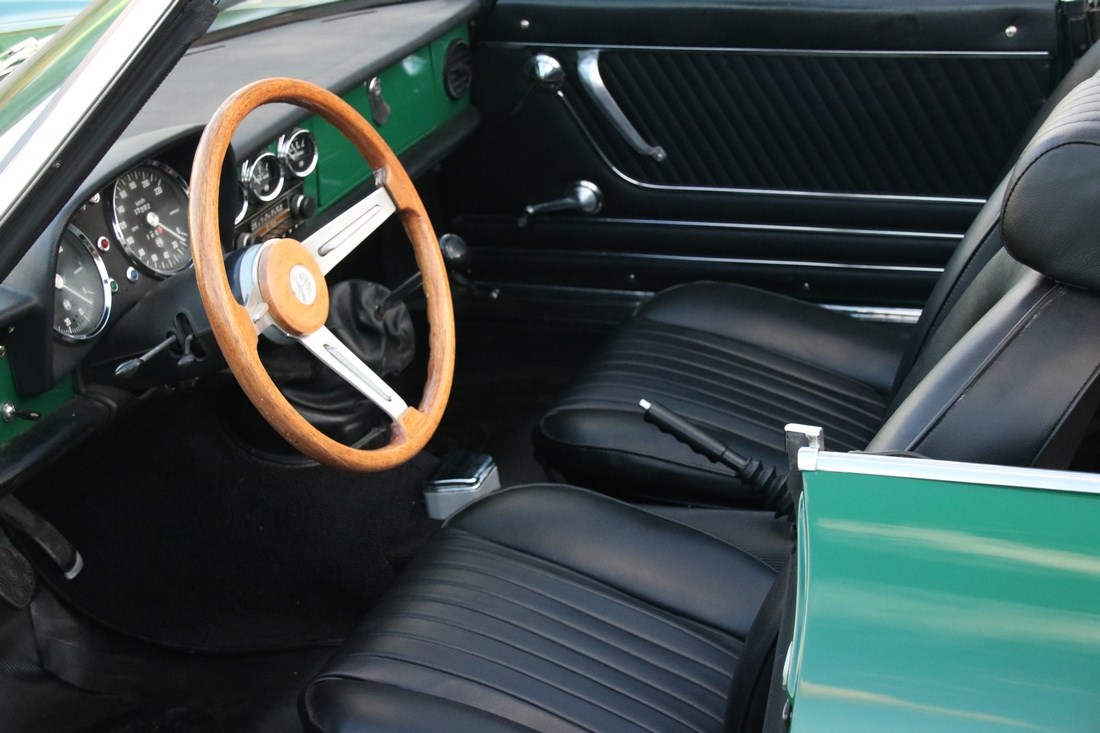 The engine compartment is worthy of a special mention. Very clean and nice green remaining paint throughout without oil traces. Could she really only have covered 67.000kms? With a glimpse into the engine compartment it could actually be true. Also no rust here. The luggage compartment is dry. Also the deeper ridge around the petrol tank has no rust or dampness. In the boot the original jack, tools and spare remain. 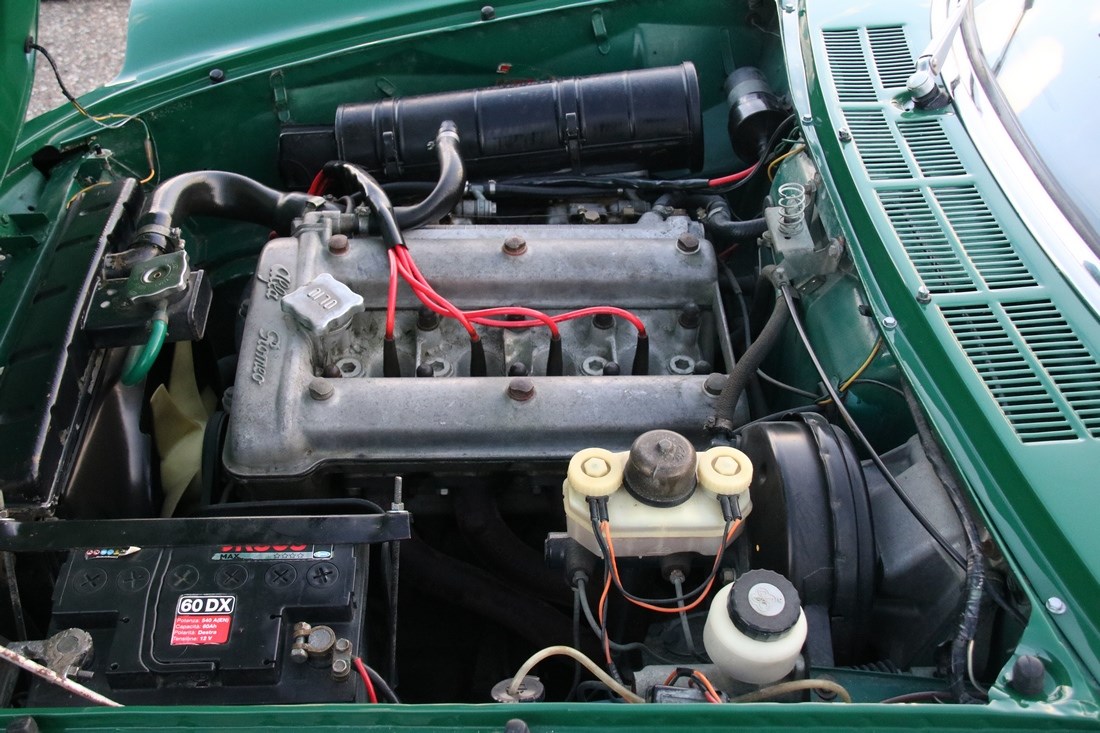 This Alfa Romeo Spider from 1974 has had four Italian owners, the first lady owner was born in 1948 in the region of Arezzo. The car never left this area and always remained in relatively good health compared to northern European exemplars. Despite this, we decided to grant this car the full restoration she deserved, appearance and rarity aside. Now she sits here in the showroom to steal your heart. The car will be delivered with a service and a new MOT. Carefree motoring to come, would you like the address of the first lady owner and surprise her?